Best Root Apps of Rooted mobile: Here comes the Article on the Top apps for rooted Android devices. The First thing comes to your mind after Rooting an Android device is what rooted apps should I install or try in my Android device Even I wondered the same when I rooted my Android for the first time then I used to surf xda website and forum and used to try some Rooted apps. Now Time has changed everyone is rooting mobile phones without any technical knowledge by using some third party softwares. 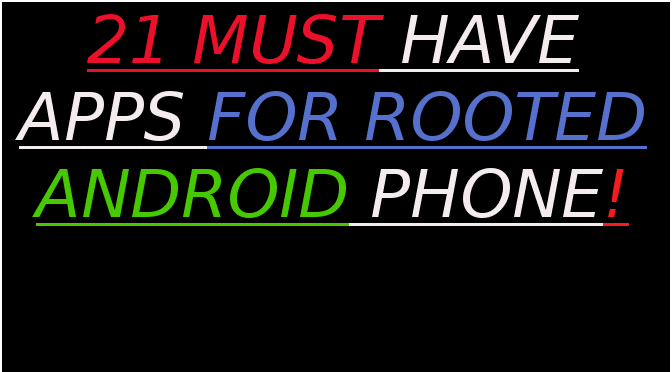 Not rooted, but must-have app for Android is SyncMate, sync tool that will transfer and sync data between your Mac and Android (as you know, syncing Mac and Android with native services of Apple is impossible). SyncMate syncs contacts, calendar events, media files, folders and allows mounting Android as Mac disk. 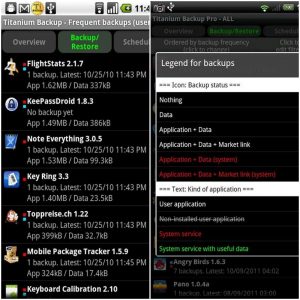 This app allows you to backup SMS,MMS,Calls and ALL apps including system apps. you can also remove useless bloatware from your android device. you can backup,restore your whole app data with the apk file. You can schedule your backups and upload it directly to Dropbox/Google drive. You can also move APP/APP data from internal storage to SD card and vice versa. This app also allows converting user apps into the system app and it has a lot more features to explore. Titanium Backup is available in a free version which comes with limited features. Get paid version to unlock more features however free version is more than enough for newbies. 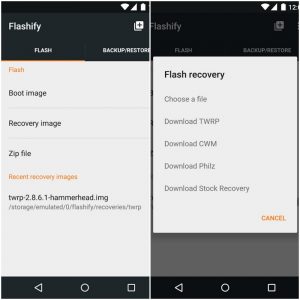 Flashify,By the name itself you can guess the App, it’s a flash tool (not flashlight app 🙂  ). It is the one of the best root apps. You can flash your zip files, recovery.img,boot.img directly from this app without opening the custom recovery. you can download  Recovery images directly from the app without googling. you can Backup/restore kernel and recovery using sd card or cloud. you can also multiple files using the flash queue. 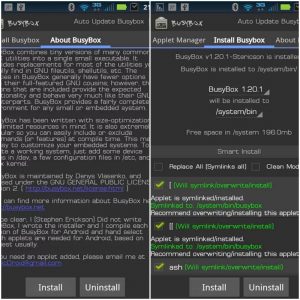 A must have App for Every Rooted device. BusyBox comes with several stripped-down Unix tools in a single executable file. BusyBox enables additional Unix commands required for running technical third party apps. Install commands from the BusyBox and leave, the app will do its work 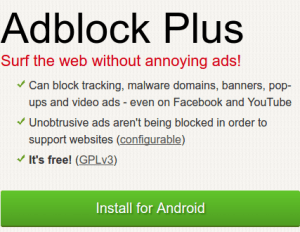 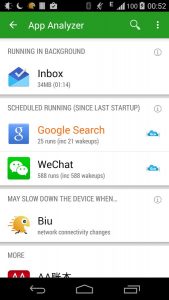 If you want to extend your mobile battery life then Greenify will do it for you. Greenify is the best Rooted Android app you can use for optimizing the battery life. This app put apps into hibernation that are running in the background and draining your phone battery. you can run all the apps smoothly without any lagging issues. you can find out which apps are running background and draining your battery juice.

Greenify is also available for the non-rooted Android devices with limited features.

check out: Hotstar for pc and Tubemate for PC 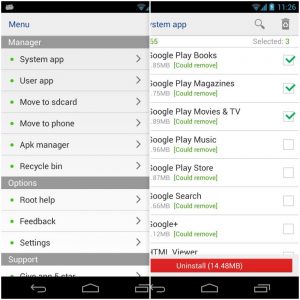 System Apps are the most annoying Apps installed on your phone which is of no use, eating up the phone ram and draining battery juice.you need to uninstall unwanted system Apps to save your battery juice. Removing the system is impossible for the non-rooted users and tricky for rooted users but now you can easily remove unwanted system Apps easily and It also checks and warns you which apps may cause instability to your device if they are uninstalled.

System app remover not only removes User Apps but It also provides some features you can move apps to sd card and vice versa, xposedApk manager.

Android 5.0+ and Android Xposed installer will not work. You can refer below link to install Xposed framework

ES File Explorer is the one App you need for completing all your file manager tasks without installing multiple Apps.

This app is the best root explorer you can find ever for Android. unlike other Root explorers, this app comes with additional features like Built-in photos viewer ,video player, Html/Text viewer,ZIP and RAR extractor and compressor with Encryption. Access to all cloud storage platforms including Google Drive, Dropbox,one drive. 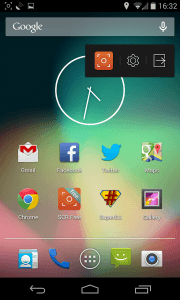 SCR screen recorder pro enables you to capture of your android screen and record Audio. This app doesn’t have any time limit for recorded videos. capture videos and record audios at a time save videos directly to external SD card. Customize the video resolution and frame rate according to your requirement in Settings Menu. SCR screen recorder app also works with non-rooted mobiles running on Android 5.0+ with limited features. Although SCR Screen recorder pro is a paid version, the developer has made it free for all on official xda forum. 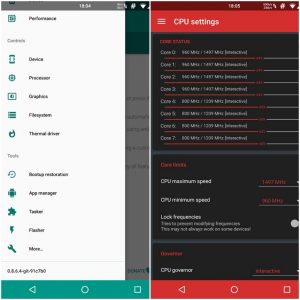 Device control comes with the whole bunch of tools that helps to boost up the device. This app has built-in features like App manager, tasker,editors for editing build.prop and sysctl,wireless File manager and flasher. Tweak CPU frequencies,voltage control, governors, i/o schedulers,GPU frequencies, governors and much more. You can also monitor battery temperature and CPU frequencies.

Control system performance with this App using the built-in tools but some features may not work on some devices, and that features will be hidden automatically. 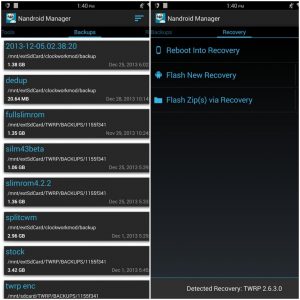 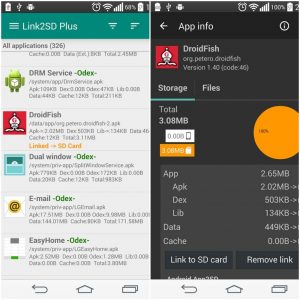 Link2SD is the complete App for managing Android Storage. Some Apps prefer to get installed on phone storage and doesn’t work if they are installed on external storage. So,this app will create a link to phone from SD card such that App assumes that the app is installed on internal storage. In addition, this app also supports features like removal bloatware from the phone, freeze and unfreeze app. You can also convert system apps into user apps and vice versa. Download the app explore the wide range of tools. 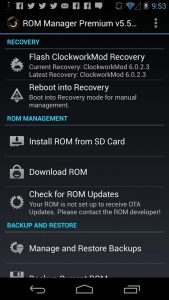 Boot Animation is the animation played when the device boots up. This app helps you to change boot animations according to your choice.  Download a wide number of boot animations for the App and you can also convert animated GIF into Boot animations and Modify custom designs and frame rate.

Fonster allows you to change fonts used by your Android system with well designed UI. This app will change all fonts that are used the operating system including web pages,keyboard. This app also provides wide numbers of fonts that you can preview and download. you can also Backup and restore system fonts with help of this app.

Firstly, Terminal Emulator is  windows Command Prompt(cmd) for android but this is different from cmd as it works with Linux commands. You can access built-in Linux commands with the app.  you can Install Busy Box for more Linux commands.

Disk Digger is an Android recovery tool that helps you recover/undelete photos, videos which you have deleted unexpectedly from the device. It supports all types media files you can able to recover and upload directly into the Google drive, DropBox or send it to your email. Disk Digger is also available for unrooted mobile with the limited digging of cache and thumbnails.

Cheat Droid Apps is the best way to edit app share preferences and change its values according to your requirement. You can hack coins/gems or solve a puzzle by changing the shared preferences values if it stores data in shared preferences. If you are tech geek you can play around and explore the apps with cheat droid. It will also help you in finding passwords of a game or app.

WIFI recovery will find your saved wifi passwords by fetching wpa_supplicant.conf file and Display your wifi passwords. It will display wifi SSID(wifi name) and PSK(password)

Build.prop Editor App is the easiest way to edit Build.prop. This App comes with the code editor and user-friendly interface that helps you in editing Build.prop easily.

Rebooting into recovery or download mode will be difficult on some devices. Quick reboot will enable fast reboot into recovery and bootloader options by giving quick access to all boot options.

That’s it guys this are 21 must have and best root apps for the rooted android device. If you like this post Share it with your Friends because sharing is caring. Don’t forget to subscribe for more updates. 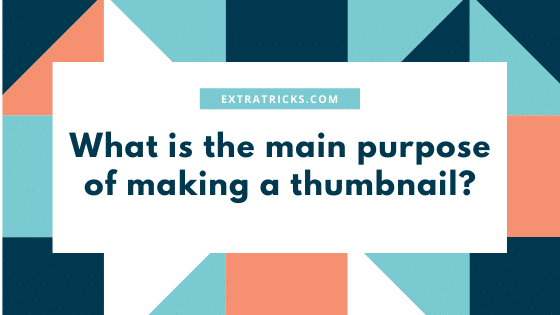 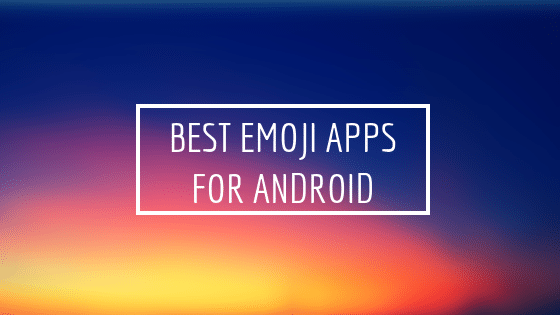 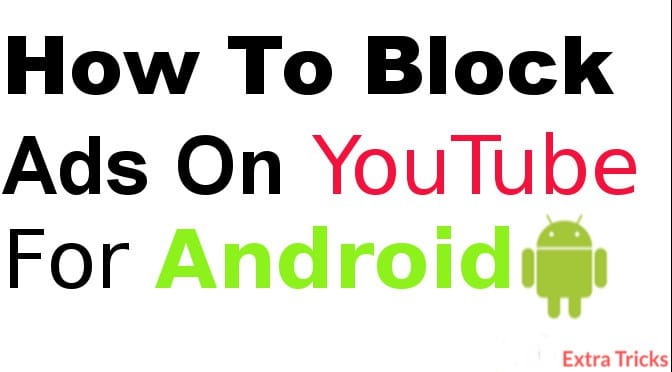 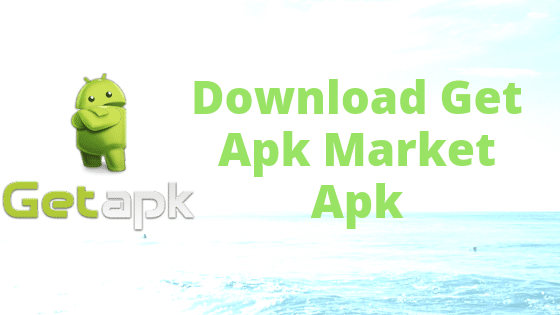